The The Rise and Fall of German-American Bund 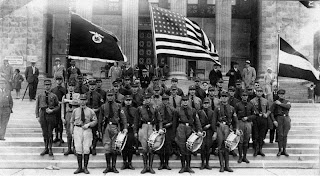 On the night of February 20, 1939, President’s Day in America and five months before the Soviet-Nazi pact dividing up Poland, the Baltic states and Finland, and six months before the German Blitzkrieg in Poland and the UK’s declaration of war on Germany, an enthusiastic crowd of nearly 22,000 gathered in New York City for a massive indoor demonstration glorifying Nazism. Banners as big as bed sheets bearing the slogans "Smash Jewish Communism" and "Stop Jewish Domination" had were nailed high the walls of the Madison Square Garden where the rally was held. The crowd of conservatively attired men and women –this might have been mistaken for delegates at a national nominating convention for either of America’s two major political parties, the males in suits and ties and the women in fashionable dresses -- hummed with anticipation as they waited for the program to unfold. A few, eager to see the opening ceremonies, stood on the seats of their metal folding chairs and gazed toward the commotion at the back of the auditorium. Precisely at the appointed hour the pounding of drums began just outside the rear entrances to the hall and washed over the crowd. The volume of the drums increased quickly and a few moments later hundreds of brown-shirted men, their arms extended in the formalized Fascist salute, marched down the aisles behind the drummers and a forest of red and gold swastika flags.
The crowd went wild! Everyone in the auditorium started cheering and chanting, "Sieg Heil! Sieg Heil!" The noise continued until the marching drummers, flag bearers and various dignitaries arrived on the stage. Speaker followed speaker to the podium after that, stood beneath the thirty-foot tall portrait of George Washington, and each more shrill, loud and excited than his predecessor, emitted the same message of hatred and warning against “Jewish world domination,” "Jewish-Marxism," and "Jewish Bolshevism." Franklin Roosevelt was denounced as “Franklin D. Rosenfeld” and the New Deal was referred to as “the Jew Deal.”
Except for the language of the speakers and the crowd – English -- the event could easily have been mistaken for a mass rally in Nuremberg or Munich. The message was the same. The tone of the speakers was the same. The posturing of the dignitaries and the crowd was the same, the saluting was the same, the flags were the same, with the exception of the sprinkling of the stars and stripes among the swastikas, and the crowd and speakers alike virtually swooned at the mention of German National Socialism and the Fuhrer Adolph Hitler. Fascist bliss and bluster ruled the hall.
The rally was sponsored by the German-American Bund, the largest, most influential and outspoken Nazi organization in the United States. At its peak the Bund never enrolled more than 20,000 members. But its spectacular rallies, ability to manipulate and manufacture publicity, and the extensive media coverage given to its pro-Nazi activities provoked nationwide hostility and fears that the group posed a serious threat to American democracy.
The Bund's birth can be traced to the years after World War I. Between 1919 and 1933 around 430,000 German immigrants arrived in the United States. Most were fleeing the catastrophic post-war economic collapse in Germany. Some had become members of the fledgling National Socialist Party before they left Germany. Others were embittered veterans of the Frei Korps, right-wing paramilitary bands who believed that Germany had been tricked out of victory in World War I because of treasonous activities by Jews and Marxists at home. Still others came to the United States for the express purpose of raising money for German causes.
Many of these immigrants openly expressed their conviction that their stay in America was a temporary exile. They intended to return to Germany when economic conditions improved. But their plans changed after Hitler became chancellor of Germany in January 1933. By then the United States was itself mired in economic depression and many of the immigrants found themselves unexpectedly unemployed, short of money and with time on their hands. Their own economic misfortune now fed their unhappiness and sense of isolation. They became the critical mass with which Germany Fascists and nationalists hoped to start a powerful chain reaction of a pro-Nazi German-American political movement. They were, for agents of international fascism, capitalism’s crippling Fifth Column. 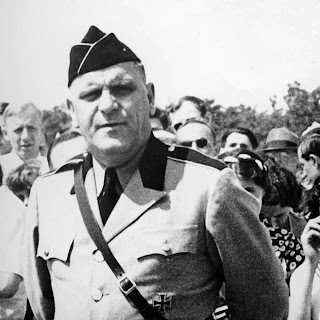 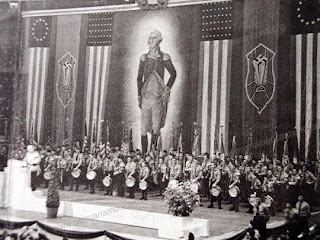 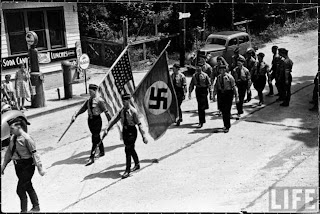 
ROBERT ROCKAWAY is an associate professor in the Department of Jewish History at Tel-Aviv University. He has authored The Jews of Detroit: From the Beginning, 1762-1914 (1986); Words of the Uprooted: Jewish Immigrants in Early 20th Century America (1998); and But He Was Good to His Mother: The Lives and Crimes of Jewish Gangsters (2000), as well as numerous articles on American history, American Jewish history and modern Jewish history.
LARRY ENGELMANN is professor of history at San Jose State University in California. He is the author of six books.

I took 4 pages of handwritten notes for future reference. I am interested in counter-jihad in my retirement and found great interest in how homeland opposition grows and develops against subversive groups. Thanks so much. I will be forwarding this to 10 other of my friends.

Shiekh Gilani of Pakistan is suing Martin Mawyer for defamation of character in the state of NY for $55 million to stop him from continued publication. This is an attack on free speech. Someone needs to help Martin out and raise the issue of these criminal jihad training camps. History starts today.

Also, consider Bill Warner's Center for the Study of PoliticalIslam.com

Your wonderful work on the Nazis is fabulous, well written and engaged me in reading it. I hope others will read, digest and assimilated its many insights into how subversives start from a few, grow, morph, organize, and govern themselves and how immigrant communities hold onto their heritage in differing manners and degrees. Knowing history means we can apply these insights today to burgeoning upstart subversive activities which undermine Western values of freedom, equality, pluralism, and human rights. If you have done more writing on civilizational jihad in the EU or America let me know. You may have and I will search for it later.

Thanks - William - in the SE of the USA

Interesting article... can't help but wonder why two experienced professors would not include a single citation?

Awesome post. I am a regular visitor of your website and appreciate you taking the time to maintain the excellent site. I will be a frequent visitor for a long time.
un stitched lawn