And Then There Were Helicopters


"And Then There Were Helicopters"

We lived right in Saigon. I have three brothers and six sisters. I am the seventh child. I was just ten years old when we left Saigon.
I don't know exactly what my father did for a living. At one time he worked at the American Embassy. We knew that if the Communists came in they would chop his head off. And my mom didn't like that idea so we decided to leave before they came in.
Starting in early April my dad asked my mom to keep the kids home just in case we left all of a sudden. Then my dad came home on April 28th and said we were going to leave right away. We didn't prepare anything. This was in the afternoon. Before that my mom warned us not to tell the neighbors. The only person who knew we were leaving was my mom's closest 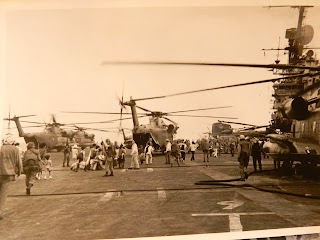