President Nixon was living in San Clemente at the time of the fall of Saigon. He has told me and others that next to the day that he resigned the Presidency, it was the most depressing day in his life. As he pointed out in No More Vietnams it was a war that was not lost by our fighting men, but by the members of Congress who refused to provide the military assistance to our South Vietnamese allies that was permitted under the Paris peace agreements in 1973 to match the aid provided by the Soviet Union to the North. At the time, he predicted that even greater damage would be done to U.S. interests around the world than to the people of Southeast Asia. His prediction, unfortunately, proved to be correct in the period between 1975 and 1980, when over 100 million people were either lost to the communists or to the West becaue of Congress's, the media's, and the Carter and Ford Administrations' fear of "another Vietnam."
His distress over the fall of Saigon was magnified by the fact that a major relocation center for Vietnamese refugees was at Camp Pendleton near his residence in San Clemente. He would often drive by the camp areas, and he has vividly described to me seeing the children playing and the women hanging their laundry outside their makeshift quarters. 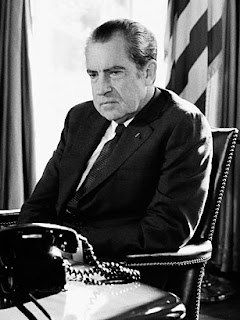