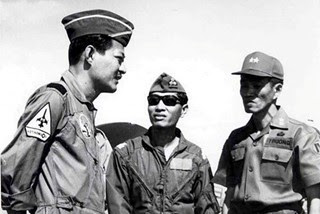 I can only tell you my truth. It is not the truth for any other Vietnamese general or military officer. It is not the truth for any Vietnamese politician. It is not the truth for my family or for my friends. And above all else, it is not God's truth. In time we will know God's truth. In time. But all I am sure of right now is my truth -- what I saw and what I believed. This is my truth.
The answer to the tragedy of the defeat of South Vietnam is simple. It can be summed up by two words: "not enough." We did not have enough supplies in the last weeks of the war. And we did not have enough soldiers. That was all. That was the whole problem. Not enough. 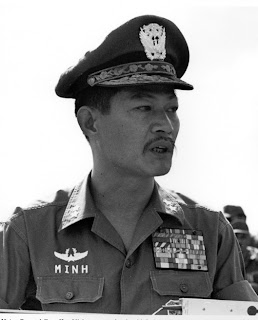 SAN JOSE, Calif. - One by one, the old soldiers approached the
flag-draped casket and paused. In an instant, the years fell away and
they clicked their heels together, stood for a moment ramrod straight
and snapped a farewell salute to the general they once served.

"He was my idol," said one of the soldiers, An Quoc Lai, as family and
friends gathered yesterday at a funeral home in San Jose. "He was like
John Wayne to me."

Tran Van Minh, a three-star general who commanded the South Vietnamese
Air Force until the end of the Vietnam War, died last Wednesday of
kidney failure and complications from a stroke. He was 66.

Minh was among the dozen highest-ranking officers of the former South
Vietnamese military who resettled in the United States after the fall
of Saigon on April 30, 1975. But it was his wartime reputation as an
honest and incorruptible leader and his postwar efforts to organize
Vietnamese Air Force veterans - not his prominent rank - that drew
more than 600 people from across the country to the service yesterday.

"There are many old Vietnamese generals who die in America, but people
do not go to their funerals," said a former Air Force officer who did
not want his name used. "Today, there are people here from Texas,
Washington, D.C., Colorado, Southern California. General Minh had
everyone's respect."

Yesterday, mourners bowed in prayer and then handed glowing incense
sticks to Minh's son, Tran Thanh Phong. He placed them in urns on an
elaborate altar laden with fruit and burning candles. Twenty Buddhist
monks and nuns surrounded the alter to offer prayers and chants.
Minh's body lay nearby in an open casket, draped with the red and
yellow flag of South Vietnam.

An honor guard marched into the hall behind another South Vietnamese
flag, and the congregation rose to haltingly sing the old national
anthem.

Along one wall, 20 middle-aged men in camouflage fatigues, red felt
berets and polished boots stood at attention, trying to sing along
while wiping away tears.

Minh's widow, Vu Ngoc Thinh, sat to the side of the altar with her two
daughters, crying quietly. "A lot of Vietnamese women take care of
their husbands out of duty," said Minh's daughter, Ngoc Chan Tran.
"But she was still in love with him."

The couple would have soon celebrated their 40th wedding anniversary,
she said.

Her father was born in the Mekong Delta, joined the military at 19 and
entered the Air Force two years later. An educated man, he spoke both
English and French.

Said a veteran named Thanh who did not want his last named used: "He
kept politics out of the Air Force. He lived modestly and acted
modestly. He set an example."]

Could you please tell me where this came from? I just want to make sure it is true. Thanks!

I interviewed Gen. Minh at his home in San Jose. His daughter Jade was present at the interview. That interview was first published in the Washington Post and then in the San Jose Mercury News in April 1985.

Clare, you and I, my father was lieutenant colonel Thai Van Nguon of the ARVN embassy in Thailand 1973-April 30th 1975. Let's do our own research on this article.