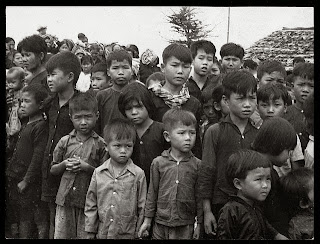 My husband was one of the men defending the Newport Bridge two days before the city fell. He was with the soldiers who huddled together and pulled the pins on their grenades after fighting for three days and nights on the far side of the bridge. When the men realized their situation was hopeless and they had no ammunition left they did not retreat into the city. They waited until dawn so the enemy could watch them. Only then did they so defiantly take their own lives. They were not afraid of death.
Not long after that a line of enemy tanks snaked onto the road, slowly crossed the bridge and entered the city. As they passed the place where the defenders made their final stand, the boys sitting on top of the tanks stared in awe at the torn and bloody ground.
My husband left no suicide note. No letter. One day he was defending the road to our home and the next day he was no more. He left me with our 5 year old daughter.
Thousands of terrified people fled the city that last week. I know now I should have joined them. I saw the helicopters and planes carry them away. I saw the packed buses and cars race through the streets toward the American embassy and the river. I waited for my husband to find me. I was lost without him. When I heard he had died I wanted to die, too, and be with him. But what might happen to our daughter after that? I was confused. All I could do, it seemed, was watch and cry.
After the enemy occupied the city I stayed inside my small apartment and ventured outside only to buy food. A sympathetic neighbor gave me two little flags – one North Vietnamese and the other Viet Cong – so I could display them in my window. In all of the windows up and down our street the new flags blossomed one morning like spring flowers. The flags of the defeated Republic of Vietnam disappeared.
I burned my husbands letters, awards, clothing, degrees and photographs – along with our wedding certificate -- and quietly whispered prayers as all evidence that he’d ever existed turned into ashes.

When I learned that Thuan was gone, that many eyewitnesses later reported what had happened, had watched the Marines calmly commit group suicide form the other side of the river, something inside me died too. The belief that life had meaning evaporated in an instant. That part of my heart that harbored and nourished romantic love also took flight. I believe I would never love again, could never give myself to anyone again. My life was truly over. I walked and talked and interacted but inside I was all ashes.
If I had followed my impulse after that I should have gone to the center of the city as North Vietnamese tanks triumphantly paraded past and I should had thrown myself beneath their treads. I should have jumped into the Saigon river and drowned myself. I should have cut my wrists and my throat.
But I did not. I did not because only I was responsible for the life of Thuy. My relatives were far away and out of touch. Thuan was gone. The innocent child now depended completely on me. She was my only reason for living. Without me she might perish also. And I felt she deserved better. She deserved at least the chance that I had been given, to live and to search for happiness. Perhaps she might find it. But for sure she needed me to guide her and to protect her.
She was terrified in those days. She watched me crying and tried to comfort me. Climbed onto my lap and wrapped her arms around my neck and held her face to mine. She was afraid of what I’d do, that I too might flee. At first her affection merely deepened my own despair. But in time she gave me the determination I needed to go on living.
And so I did.
Thuan was a scholar. I fell in love with him when I first saw him readying in a small café in Danang near my home. He was slight, intense, with wide eyes and he wore a pair of wire rimmed gold glasses. He smiled at me when he looked up. A few days later I stopped to ask what he was reading. He told me. That is how it began. The was the fateful spring when the Americans began arriving in great numbers in Danang. They arrived in March, three months before Thuan and I were married.
He was a school teacher. But the war called. Many of his friends became Marines. He did not try to avoid the military. With friends he joined the Marines. He believed in his country, he said. And he believed that the Communists in both the North and in the South would, if victorious, simply replace the old French Imperialism with a newer but even more oppressive form.
I became pregnant during one of his leaves from duty. We moved first to Vung Tau and then to Saigon so we could be with each other more often.
Life was hard. But life had always been hard. When the Americans left it became a little harder. Still my husband believed our country would win the war and that some day he could return to teaching.
But everything changed in the spring of 1975. Everything collapses so suddenly. Thuan remained with his unit rather than return home. And finally, not far from home, at the Newport Bridge defending the gateway to the city, he died with his friends. He left me no note, sent me no final letter. Yet I know he was thinking of me in his last moment of life. And I know in my last moment I will think of him and see us together again. I know.


Three months later Pham Thao was notified that there was a sponsor for her in the United States, a church congregation in Wisconsin. She was transported to Bangkok where she was kept in another refugee center and after three more weeks flew to the US. She attended a vocational school and became a nurse. Thuy graduated from college and medical school and today is a pediatrician in Kaiser Permanente Hospital in ***** *****, California. She is married and has three of her own children. Her mother lives nearby. 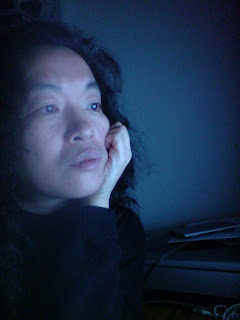