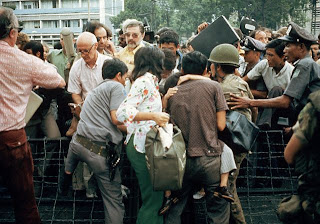 Beech, left, April 29, 1975, in Saigon, on the left in white short sleeved shirt and glasses looking down.

"Christ, Almighty, How Can They Do This?"

I have to believe this is a first draft, stream of consciousness sort if draft; otherwise, I cannot see how this man won a Pulitzer Prize.

He got a Pulitzer for his article on the American prisoners who were brainwashed during the Korean war. Not for this article.